Continuing the discussion on the Age of Design….

My friend Joshua Long, while ruminating on the concept of the Age of Design, had 2 contrasting scriptures come to mind: The Tower of Babel and Nehemiah 1 (where Nehemiah prayerfully undertakes the task of restoring ruined Jerusalem)

And that made me think of Spaceship Earth.  Yes, the ride at Disney’s EPCOT.

Hang in there with me…. 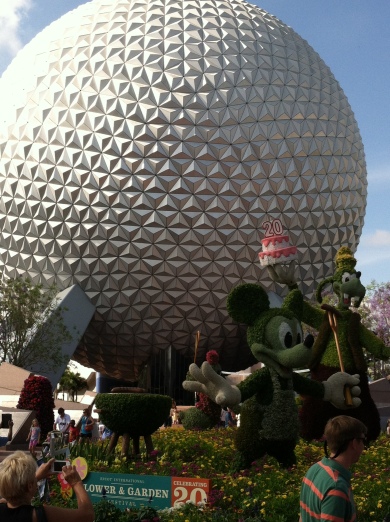 I remember the old EPCOT – back when the sleek fonts were actually futuristic and Michael Jackson’s “Captain Eo” was actually cutting edge.  It was a time before social media, before the world wide web.  A simpler time.

The iconic attraction of EPCOT was and continues to be “Spaceship Earth”, the colossal geodesic dome that dominates the front of the park entrance.  It is a slow moving ride through animatronic scenes depicting the development of communication technology.   The narration to the ride has been through several iterations, getting an update every decade or so.  Throughout the 90s, the voiceover featured the inimitable Jeremy Irons.  I can still hear Irons’ voice predicting the age to come, the 21st century, the age in which we presently live:

“A new communications supernetwork is being built before our eyes. Spaceship Earth glows with billions of interactions carrying news and information at the very speed of light.”  (taken from the script found on the EPCOT Discovery Center website – they even have audio of Irons’ narration)

At this point, the ride turns through a tunnel of tubes of light, as though we were in the middle of a fiber optic cable.  Irons continues:

“But will these seemingly infinite communications become a flood of electronic babble? Or will we use this power to usher in a new age of understanding and co-operation on this, our Spaceship Earth.”

And just as he says “Spaceship Earth” the background music swells to a heroic theme, ride emerges into darkened planetarium, and our eyes affix themselves to a spectacular vision of the planet earth.  A lovely moment.

A flood of electronic babble … or a new age of understanding and co-operation?  That was the secular question at the dawn of the Age of Design.

In a way we have both.  Humans have both dignity and depravity, thus it makes sense that our advancing communications technologies would reflect that truth.

Now that is a good question for Christians to consider in the Age of Design.