Capernaum is a village of archaeological riches.  The remains of the 2nd century synagogue impress they eye and excite the imagination.  Excavations have unearthed many neighborhoods from different eras, giving information on the Arab, Byzantine, and early Christian periods.

The Synagogue at Capernaum

For me, the most exciting discovery is the 1st century home that is widely described as “Peter’s House”  Underneath the ruins of Byzantine church, archaeologists discovered the remains of a first century home which underwent a curious transformation in the middle of the first century.  A central room was plastered over, the pottery changed from domestic pottery to votive lamps and large containers of oil.  What could have happened?  A clue is found in the plaster: graffiti, hundreds of markings etched into the walls, making reference to Christ.  The home was transformed in the middle of the 1st century into an early church!

This site is indeed the best candidate we have for the home of Peter’s family.  After Jesus was rejected at Nazareth, he came to Capernaum to the family that he considered people of peace.  Peter and Andrew extended peace back to Jesus, inviting him to come and live with them in their family compound. 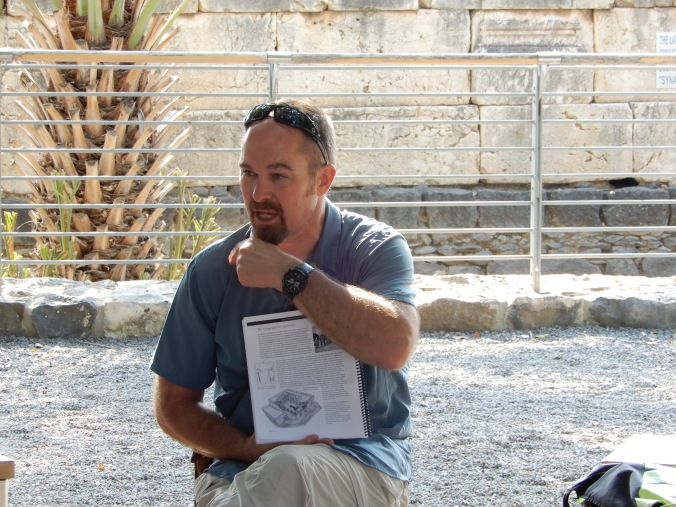 Bob introducing us to Capernaum.  Behind him you can see the wall of the 2nd century Synagogue, which rests upon the black basalt stones that were the foundation of the 1st century Synagogue.

Interestingly, this house is one block away from the great synagogue in Capernaum.  As we stood between the two sites, Bob reminded us of a simple and challenging truth:  Jesus’ ministry strategy wasn’t to get people to come to synagogue and build better synagogues.  Rather, Jesus made his base of operation the home.

Homes of that era were like little fortresses.  Multiple generations lived together with extended family (aunts and uncles).  The homes were designed around a central courtyard with rooms opening onto the court.

“Jesus throws open the doors” said Bob.  “He’s creating a new kind of family that exists for the sake of others…. The mission is to seek and save the lost.  Jesus is carrying out that mission with a house full of people – people who he identifies as his own family.”

The large extended family in the household, said Bob, was Jesus’ model for discipleship.  Jesus didn’t invite people to a class; he didn’t enroll them in a program or dazzle them with a slickly produced event. He invited people to share in life together, to live together as a spiritual family.  He invited people to learn his character by living alongside him.

Listening to Bob teach, I remembered something I had read in Pierre Hadot’s What Is Ancient Philosophy:

“Most people imagine that philosophy consists in delivering discourses from the heights of a chair, and in giving classes based in texts.  But what these people utterly miss is the uninterrupted philosophy which we see being practiced every day in a way which is perfectly equal to itself….Socrates did not set up grandstands for his audience and did not sit upon a professorial chair; he had no fixed timetable for talking or walking with his friends.  Rather, he did philosophy sometimes by joking with them, or by drinking or going to war or to the market with them and finally by going to prison and drinking poison.  He was the first to show that at all times and in every place, in everything that happens to us, daily life gives us the opportunity to do philosophy.”

Hadot makes the case that ancient philosophy was not about giving lectures, it was about sharing life together and yearning to know the good life.

Jesus one ups the ancient philosophers.  He doesn’t just seek the good life.  He offers it.  He came that we might have it and have it abundantly.  And it seems that part of his design is that we experience it gathered together with people of peace in the home.

That’s not to say we don’t give up on the institutional church; Jesus did continue to teach in the synagogues.  But the real action of ministry happened in the streets and the homes and the shops.  The question we are confronted with is: How can we start experiencing our faith more in our homes, around our kitchen tables, in our backyards, and on our front porches?

Share your thoughts in the comments below!  And help us extend the conversation to more people of peace – share this post with someone and ask them for their thoughts.

Me and my main man Peter. Just hanging out on his front porch, overlooking the sea.

About the cover image:  This cover image is a photo taken standing just beside the Synagogue in Capernaum.  The photo looks over the remains of the neighborhood right across the street.  The structure behind the palm tree is the memorial chapel built over top of the excavation of “Peter’s House”   On the other side of that chapel is the sea of Galilee.  This photo gives a sense of how close everything is packed together in Capernaum.

6 thoughts on “Jesus Based His Ministry In A Home, Not An Institution (a Footsteps Friday reflection)”