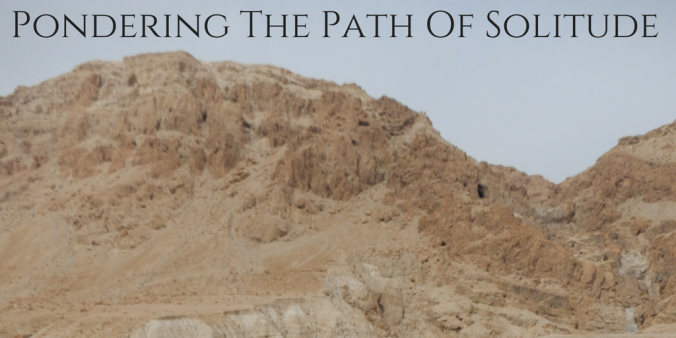 This post is part of a series reflecting on my Pilgrimage to the Holy Land. The Pilgrimage was a guided experience called “The Footsteps of Jesus”  – every Friday, I’ll be posting a “Footsteps Friday” reflection. I look forward to your sharing your thoughts and comments.

They believed the world was worsening, bad behavior reigning among all.  The nations were rent with wars and rumors of wars.  Empires rose and  morals fell.  Men of God acted more like men of gold.  Surely, they thought, Messiah would coming soon.  It was their part to prepare, to clear a straight path by keeping a strenuous code of conduct, purity, and worship.  The end times, after all, were imminent.

They were the Essenes, one of the great religious movements within Judaism during Jesus’ time.  We were to visit the site of Qumran, widely believed to be an Essene community.  It was here that the famous Dead Sea Scrolls were found.

In my studies of the Essenes, I had come to imagine a dust-covered band of shaggy hermits living in caves, poring over parchments of scriptures and esoterica.  I imagined the ancient equivalent of a trailer park for religion freaks.

Instead, we saw the ruins of an extensive campus with a dining hall, pottery industry, dormitories, and publishing house.  I learned about the Essenes’ sophisticated water system, capturing the runoff from the mountain storms, channeling it into great storage cisterns and a system of ritual baths (called mikvehs).

One of the cisterns the Qumran community used to store water

I learned that Qumran wasn’t a grubby community of hermits – it was a thriving monastery of disciplined, passionate, and dedicated people.

More than that, I saw the stark beauty of the place.  To the east are the Judean mountains, a cream-colored wall of dry stone etched with a labyrinth of valleys cut by millennia of rain runoff.  To the west stretches a narrow plain leading to the Dead Sea – a bright expanse stretching to the horizon.  The day of our visit was shrouded with haze, but I imagined on a clear day, the sky would be a dazzling blue, with sunlight bejeweling the waters.

The archaeological park at Qumran

For those who seek solitude, God provides beauty and wonder. 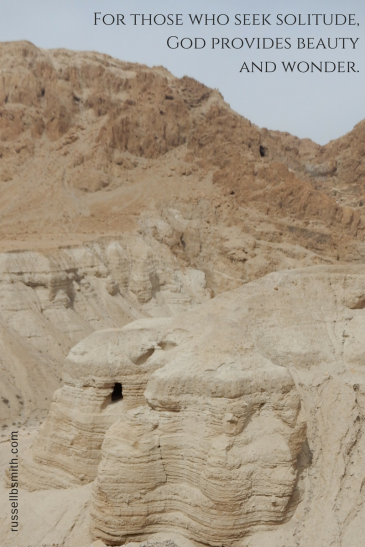 We reflected on the path that this community had chosen: a path of withdrawal from the affairs of the world.  They practiced their intense disciplines of devotion and study in relative peace and quiet.  They were devoted their lifetimes to a community built upon the yearning for a more intense experience of God.  In many ways, they were the forerunners of the monastic movement.

Yet Jesus followed a different path.  His path took him through the villages and towns to walk among tradesmen and fishmongers, soldiers and sinners, whores and hucksters.  His was not a path of life-long withdrawal (though he did have a rhythm of times of retreat – we will see later that times of solitude are good and necessary).

If we would follow Jesus, we must seriously consider his pattern of life.  There is something seductive to a life of withdrawal from the chaos of the world.  But Jesus came to live with, be among, and walk beside the people of the world.

What would it look like for our churches to do the same?

Was this encouraging, interesting, or helpful?  Let me know in the comments below.  Also, please share with your friends.  And, if you haven’t done so, be sure to sign up for my newsletter – you’ll get a regular dose of inspiration and encouragement in your inbox.

3 thoughts on “Pondering The Path Of Solitude”