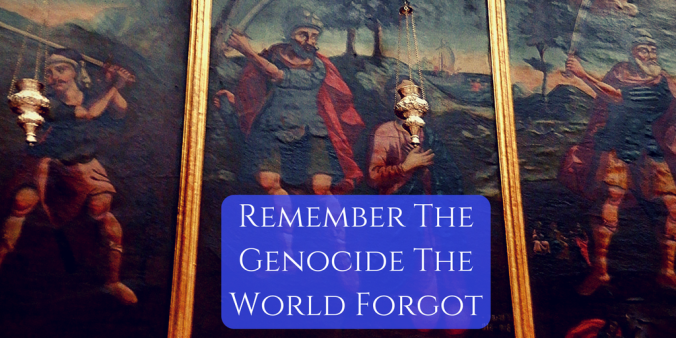 And then there’s the Armenian Genocide.

Never heard of it?  Most people haven’t.

During World War 1, the Ottoman empire took advantage of the chaos to undertake a systematic extermination of the Armenian people.  When the bloodshed finally ended in 1923, over 1.5 million Armenians had been slaughtered.  Sadly, the rest of the world paid little attention; there was, after all, a war on.  After the war, the story was quickly forgotten.  Even today, the Turkish government refuses to acknowledge the genocide and actively advances propaganda campaigns to suppress the truth.

Why would there be memory of this forgotten holocaust in Jerusalem?

We need to travel much farther back in history to help us understand.  In 301, King Tiridates III of Armenia adopted Christianity as a state religion (that’s 11 years before Constantine’s much more publicized conversion).  Shortly thereafter, a large number of Armenian monks settled in Jerusalem.  They have maintained a continuous presence there ever since, having their own quarter in the Old City of Jerusalem.  The mysterious and elegant St. James’ cathedral is cornerstone of this quarter. 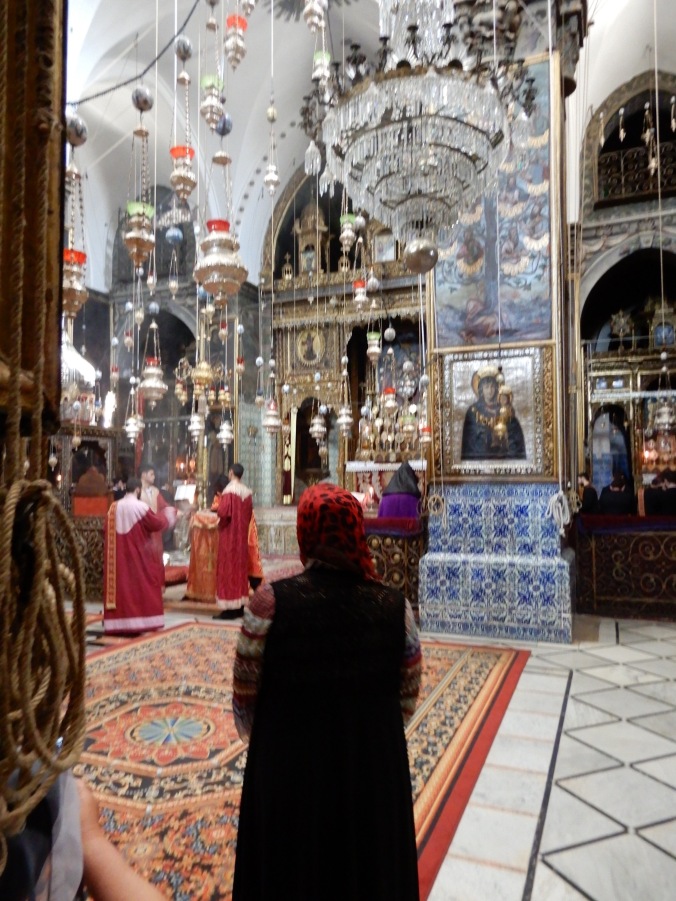 The Armenian church’s heritage is ancient and yet is little known to American Protestants.  They first translated the Bible into the Armenian language in the 5th c.  In 554, they officially split from the Orthodox and Catholic churches, citing differences with the declarations of the Council of Chalcedon (specifically, they reject the idea of that Christ has two distinct natures, one divine and one human; they insist that the divine and the human are mystically united in a single nature).  Their liturgies, practices, and sanctuary design all have a distinctive flavor that are musical, sensory, and rich.  The church and Armenian culture are inextricably woven together.

After the 1915 genocide, Armenians fled Turkey for various diaspora communities all over the world.  A large group settled in Jerusalem, bolstering that community.  The people of Jerusalem knew survivors, they heard the stories, they saw shattered families working to put their lives back together.  Memory of the genocide is indelibly stamped upon the community.

As I roamed the Armenian Quarter, I saw posters everywhere, encouraging people to remember the genocide.  Yet what was most striking was this piece of street art.

The Armenians remember.  They remember because they want to stop the cycle of genocide.  They want their stories told so that future generations can recognize the signs and can stop the madness before it starts again.

Take some time and learn about the genocide.  Here are a few resources to get you started:

Watch the movie “The Promise” – the first American feature film to deal with the genocide.

Read the National Geographic feature on the genocide and its legacy today.

Visit this website for the genocide museum and watch the video testimony of survivors.

Visit the Armenian National Institute and read original documents related to the genocide.

About the cover image:  This is a detail from the Cathedral of St. James in the Armenian Quarter.  The walls of the cathedral are covered with icons.  These icons represent a whole string of icons depicting martyrs for the faith.  It was striking to face a wall full of depictions of beheadings.  Though they don’t depict the martyrs of the genocide of 1915, they do represent the persistence of the memory of martyrdom in the Armenian church.  Sadly, I did a really poor job of photography while in the cathedral.  Most of my photos are blurry or ill staged.  As you can see in this cover photo, I mistakenly snapped this shot with a censer covering the face of the martyr, and I left out the martyrs in the outside 2 icons.