Excuse me, Russell, did you say “Spock?”  In Jerusalem?

If you keep your eyes open and stay alert, you will find wonders in unexpected places.  The street art of the Old City of Jerusalem held a wealth of surprises.  Consider these lovely romantic doors: 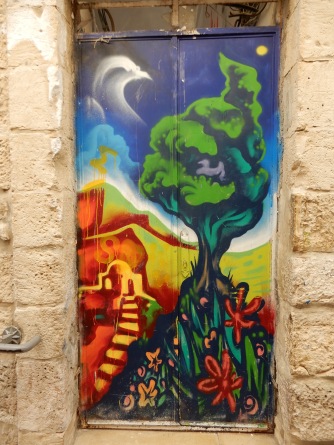 Or perhaps this provocative work that I found early one morning in the marketplace:

Interesting and thought provoking.  But Spock?

On one of my ramblings, I came across this beautiful stylized artwork of the Hebrew letter shin (the letter is shaped something like a cursive W with a dot above the right arm).

Why this letter?  What is the significance?

There is the Spock connection.

Just a few weeks before our Pilgrimage, I watched Adam Nimoy’s terrific documentary “For the Love of Spock” in which he told the story of his father and his father’s creation of the character Spock.  One of the highlights of the film was a clip of Leonard Nimoy explaining the famous Vulcan salute.

Early in the second season of Star Trek, they filmed the episode “Amok Time” in which Spock returns to his home planet, Vulcan.  Nimoy thought that Vulcan culture, being an ancient and dignified culture based on logic, would have a distinctive greeting ritual, much like the bow Asians use to honor the divine spark within the other person.

As Nimoy thought about this character-building challenge, he remembered being in synagogue as a child.  Men were down front praying.  Young Leonard was transfixed by the intensity of the Hebrew blessing, so he opened his eyes and peeked.  He saw the men standing with their hands extended in the familiar “V” shaped gesture that he would later adapt as the Vulcan salute.  He later learned that the shape of the gesture was supposed to stand for the Hebrew letter shin.

Shin is the first letter in the Hebrew word “Shaddai” which means “almighty” and is one of the major names of God in the old testament.  The hand gesture in the shape of shin was meant to accompany the pronouncement of the priestly blessing upon the people.  Nimoy said he loved the idea that, as people went around giving the Vulcan salute, they were in a way offering blessings to one another.

Finding that letter shin was one of my little kairos moments on the trip.  It was a special moment in which I realized that God had taken me through some extracurricular preparation work so that I could appreciate this little visual treasure when I stumbled across it.

The threads that God uses to weave the fabric of creation are fine and subtle.  These little glimpses of beauty and blessing are magnificent and bring me great joy.  And these glimpses remind me that though faith’s roots are ancient, it has a contemporary resonance and power that cannot be denied.

Where do you see the fine threads of God’s weaving?  What are the small unexpected discoveries that make your heart rejoice?   Comments are open.

3 thoughts on “Shadows Of Spock In Jerusalem”