I’ll wager you’ve never heard of it.  But it’s almost certain that Jesus spent a great deal of his early adulthood there.

The Galilean city of Sepphoris had been destroyed by the Romans during a rebellion after Herod the Great’s death.  Herod’s son, Antipas, decided that he would rebuild the city and make it his capital. This massive public works project would have provided employment for artisans in all the surrounding villages of Galilee, including Jesus’ family.

Exploring the lower city of Sepphoris

As we walked the excavated streets, we saw magnificent and richly detailed mosaics, we reflected on the immense wealth that supported the reconstruction of this city.  Though many of the best preserved mosaics are from the 2nd century, we easily can imagine the earlier wealth that flooded in as a result of Antipas’ grandiosity.  The center of the city is built on a hill that juts up above the surrounding plain.  In your mind’s eye, imagine Jesus working on a cluster of magnificent buildings on that hill, the sun glinting off the fresh-quarried limestone.  It gives new texture to Jesus’ teaching “You are the light of the world – a city on a hill cannot be hidden.”

Jesus and his familial co-workers made the hourlong walk every day from the suburban village of Nazareth to the energetic and wealthy urban Sepphoris.  They would work alongside other builders, sharing stories, telling jokes, eating together, solving technical challenges, seeking one another’s advice, and all the other types of interaction that go along with being part of an exciting and growing metropolis.  Then Jesus would go back with his brothers and cousins to his home in Nazareth.  This was most likely the pattern of Jesus’ life for 15-20 years.  Nazareth was home; Sepphoris was “the office.”

Elaborate mosaics from one of the homes in Sepphoris

Bob took us to the remains of the theater in Sepphoris. Workers were setting up a stage and lighting rig for a middle school graduation that would happen there later in the day.  They graciously allowed us to have a time of reflection there while they ran their wires.

He reminded us about Jesus’ pilgrimage to John the Baptist’s ministry by the Jordan river, far to the south.  John’s gospel tells us that while Jesus was there, he met a bunch of fellow Galileans – fishermen from the neighboring town of Capernaum.  Jesus invited them to where he was staying and they held long conversations into the evening.

After his pilgrimage, Jesus returned to Nazareth to be with his family.  Soon thereafter, he taught in the synagogue at Nazareth.  In his teaching from the prophet Isaiah, Jesus introduced his vision of God’s mighty work.  Jesus dared to suggest that the promises of God were now fulfilled, the kingdom was at hand, and said that the kingdom would include not just the Israelites, but all nations.

In response, the people of Nazareth rejected Jesus in a powerful way. They seized Jesus and took him to the cliffs to throw him to his doom. Jesus slipped away from the crowds and escaped to Capernaum.

Then Bob pressed his point home: “Where is Jesus’ family?”

Bob looked around at us as we sat in the theater, attention fixed on him, “Family was there for protection and provision.  Why are Jesus uncles and brothers not protecting him?” We had no answer.

“Jesus is rejected by his own family.  This is the most painful rejection of all.”  Jesus didn’t live up to the expectations foisted upon him and he is rejected.  This is crucial to understanding why Jesus goes to Capernaum.

Jesus extended his message, but found that his family and hometown were not people of peace.  They responded with anything but warmth. So, he went to where he knew there were people of peace: Capernaum. 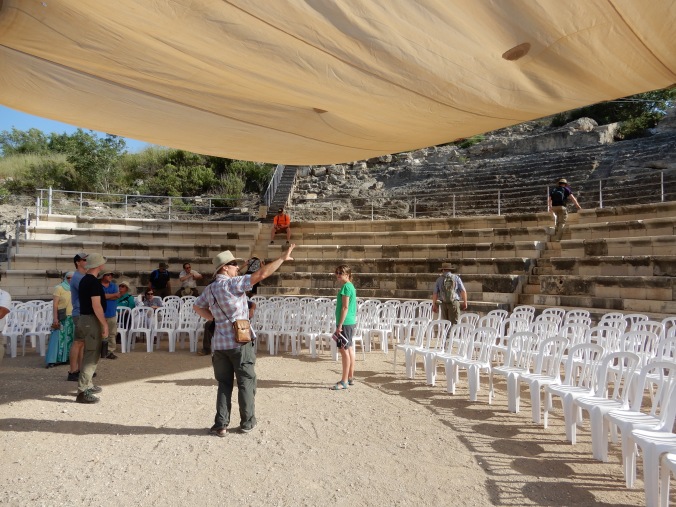 Bob teaching in the theater at Sepphoris

This is not to say that Jesus stops loving or caring for his family.  Dying on the cross, he asks his disciple John to care for his mother.  Several of his brothers are counted as early leaders in the church.  Clearly there is some kind of reconciliation and coming together.

The point of the teaching, rather, is to remind us that there are people of peace that God raises up in our lives.  When Jesus was rejected, he was able to go to these people of peace and receive welcome.  They provided the headquarters for Jesus ministry in Galilee.  They became the inner circle of the movement that would  transform the world.

This teaching raises challenging questions (Let me know your thoughts in the comments below):

Keep extending your peace – do not hide it under a basket.  Let’s see who responds.

About the cover image: The cover image for this post is a detail from the great mosaic floor found in the large banquet hall in Sepphoris.  The whole mosaic tells the story of a drinking contest between Dionysus and Hercules.  The detail I’ve chosen is the most famous element of that mosaic: a large depiction of a beautiful woman, thought to be Venus.  The detail of the mosaic and the enigmatic smile have led some to dub this work of art “The Mona Lisa of Galilee.”  I took several photos in the banquet hall – the light was quite dim, so I had to crank up the contrast and the saturation on the photo to really bring out some of the colors.